Crowdshipping is an innovative concept in logistics. When conventionnal models are using consolidation with sorting center and trucks to despatch their parcels, Hytchers allows packages to move on directly in a straight line in the car of private individuals. Parcels avoid then detours and leverage existing trips to be delivered.

Antoine, co-founder of Hytchers, was used to hitchhike a lot during its studies in Woluwé and Louvain-la-neuve. Once, he forgot a book and imagined that this book followed him in another car. Petrols stations being the best place to get a lift, that’s how he imagined the concept of a netwok of petrol stations. One year later, he met Jonas in HEC entrepreneurs and the two friends decided to test their idea, collaborating with DJM digital and Total Belgium.

“What if my book hitchhiked?” Antoine, co-founder of Hytchers

A bit of etymology

Before it was called Hytchers, the project was launched under the name of “Parcel’Hitch”, and the first logo was :

Quickly, we understood that it wasn’t good enough : too long, difficult to recall and above all difficult to pronounce!

Hytchers was shorter and more punchy, kept the Hitch and allowed us to make a nice logo (see below).

But some facetious minds were seeing a kind of a “bomb” in this, so we brainstormed again on whiteboards help with torrents of caffein…

Before getting to our final version that you know, uniting 3 significations :

In july 2016, we decided to create the company since we planned a test phase with Total. A first financial round allowed us to develop a beta version of the App on iOs and Android. Thanks to your numerous feedbacks, we proved the feasability of our solution! We now have to put in place a production phase and a scale up… a big challenge to be completed for our second birthday! 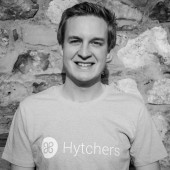 All stories by: Jonas